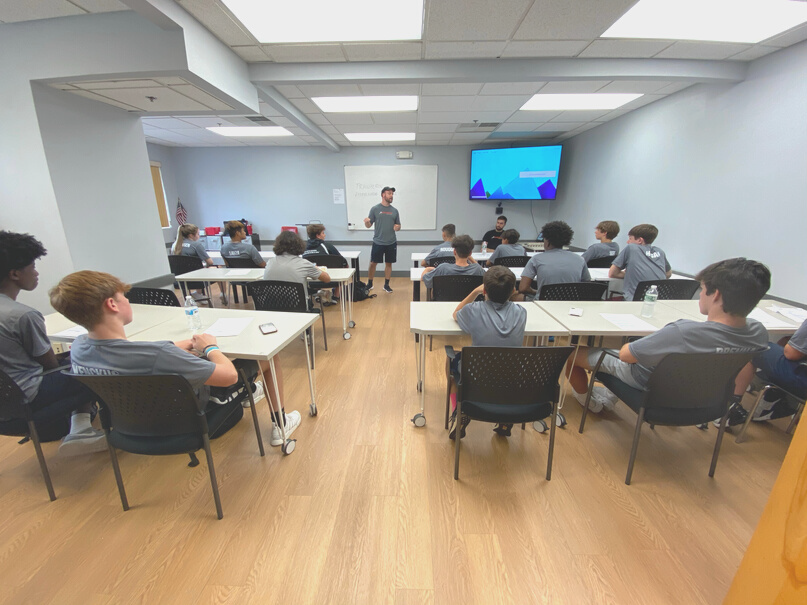 To provide a catalyst for the development of the mind and body, which prepares student-athletes to excel in the mental and physical challenges of high school, as well as throughout their lives.

Given the responsibility and trust of our parents with their most valuable asset, we will improve the mental and athletic capabilities of our student-athletes through unique educational experiences, physical training, and opportunities for intellectual growth through exposure to the world around them.

The benefits of the Parisi Academy are not just limited to the classroom and training room. Parisi Academy student-athletes expand their horizons through a variety of different experiences that include:

Unlike our competitors, the Parisi Academy has a proven track record with an established methodology for putting student-athletes in the best position to succeed in the classroom, on the field or court, and in their communities. Student-athletes benefit from small class sizes with an average class size of 10:1 student-teacher ratios in core subjects (12:1 maximum) and a committed Ph.D. and master degree faculty.

No one sits the bench at Parisi. We take this seriously
and this saying is the basis of our mentoring program. Each student-athlete is assigned to a faculty member at the beginning of the second quarter to ensure that his/her needs are being met, they are feeling comfortable and included, and are having a great overall experience. Should there be an issue, it is dealt with immediately and resolved.

History of the Parisi Academy

It has always been Parisi’s vision and mission to empower young athletes to reach their goals, as well as play our part in increasing their confidence and self-esteem. It started three decades ago with Bill Parisi founding the Parisi Speed School. Bill knew there was a better way for youth to train, which was safer and more effective than was currently available. So, he set out to create a system and a business that would benefit young athletes of all ages and skill levels. Thirty years later, Parisi has trained tens of thousands of athletes and Parisi has become an industry leader in youth sports performance.

It’s with that same enthusiasm and passion that we are excited to carry the Parisi vision and mission into the classroom, and coincidentally, it started much the same way as Parisi Speed School. Bill saw a huge void when his oldest son Will was transitioning from middle school to high school. In some ways, his son was ready for the next step but in some ways, he could benefit from a pre-high school enhancement year. The same held true for some of Will’s friends. Physically, mentally and emotionally these young men were all at different stages developmentally.

It was at this moment that Bill had a paradigm shift and saw that there was a need for a program, solely focused on preparing young athletes for high school, focused not only academic and athletic development, but emotional development. His vision was to provide a catalyst for the development of the mind and body, which prepares student-athletes to excel in the mental and physical challenges of high school, as well as throughout their lives.

Over the course of the next two years, Bill spoke with professors, PhD’s, teachers, coaches and principals in order to turn his vision into something tangible. He looked inward to his current organization to see how an infrastructure and systems could be implemented, in order to achieve short-term growth as well as long-term success. By the time his son Dan was ready to enter the 8th grade, the Parisi Academy was a reality.